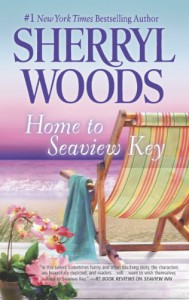 It drives me freaking nuts that books that are part of a series aren't labeled at all. Or if they are there's no indication of what installment the books is.

This book is apparently a sequel but there is not one damn thing to indicate that. If I had known I would have held off reading the book or wouldn't have bought it.

So apparently people wanted more of the couple, Hannah and Luke, from the first book, which is why this one was written even though there is (supposed to be) a different hero and heroine in this one. But there is an inordinate amount of the previous couple so far. The problem is that I feel no connection to them whatsoever. So, I don't have the buffer of previous good feelings about them to color their actions in this book and quite frankly I think they need to grow the hell up. Particularly Hannah, and while we're at it, her grandmother, too.

It has been over twenty years since the heroine of this book, Abby, had a high school romance with Luke. But everyone is legit losing their shit over the fact she is back in town and how that's going to affect Hannah and Luke and what does Abby want?! As if she didn't grow up there, too. They make her sound like some man-stealing jezebel who is out to cause them trouble. She wasn't like that in high school and you all haven't kept in touch so you don't know who she is now so why all the hysteria? It's ridiculous. The worst is Grandma Jenny who not only acts like Abby is the Whore of Babylon she keeps saying she wants her gone. Why? What the hell has this woman done to anyone? Then knowing the hero, Seth, is interested in Abby—without knowing a thing about Abby! Up to and including that it even IS her!—Grandma Jenny calls her a "cougar" and accuses her of being "on the prowl". WTF?

Again, it's been twenty years since high school. They've all been married divorced had kids, even one grandkid. Their attitudes just defy explanation and I quite dislike them already.

Why is it when I want a sequel with more of the couple from the first book I can never get it??