Finished — Cowboy with A Cause 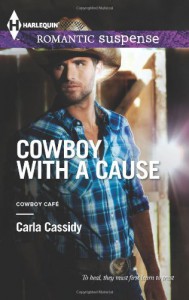 Readable book but really not the best introduction to the Romantic Suspense line (it was given away free in the Try Harlequin deal — I think it may still be free). A lot of Harlequin category romances have suspense plot lines regardless of the line in which it's published. I'm never entirely sure why a book is published under one line and not another. But typically the RS and Intrigue lines have a far more central suspense plot even if it does get sidetracked.

The suspense plot in this book was rather weak. I really think this book would have been better under another line. Or at least not the one they used to get more RS readers. The story was only okay and it could get rather cheesy. I liked the characters, but this is probably the worst I've read of a character with a disability saying they couldn't have the life they wanted. Melanie really started to piss me off with her I'm-just-a-cripple B.S.

And just a warning, there is a part of the plot that is not only not resolved but left in a slight cliffhanger at the end for the next in the series.